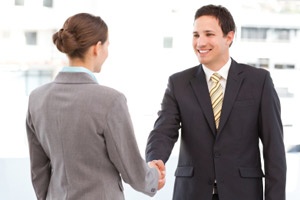 This Thursday, June 26, is National Handshake Day. So, time to ensure that yours is the best it can be.

Handshakes have been around practically since the birth of civilization, and were originally a way to prove that you had no weapons in your hand when meeting someone new.

The handshake is still based on trust, and showing people that you want to connect with them.

Research backs that up ... A 2012 MIT study “The Power of a Handshake: Neural Correlates of Evaluative Judgments in Observed Social Interactions” concludes that “strangers do form a better impression of those who proffer their hand in greeting.”

If you're looking for a job, having an impressive handshake also can win over your interviewer. One survey of HR professionals indicates that potential employers are MORE likely to overlook visible body piercings or tattoos than an ineffective handshake!

A 2008 study by the University of Iowa’s Tippie College of Business quantified the importance of a good handshake in job interviews. It found that students who scored high with five trained handshake raters were also considered to be the most hireable by job interviewers from Iowa City-area businesses. The professor who coordinated the study said, “We found that the first impression begins with a handshake that sets the tone for the rest of the interview.” He elaborated, “The handshake is one of the first nonverbal clues we get about the person’s overall personality, and that impression is what we remember.”

According to another study, done by the Incomm Center for Trade Show Research, 76 percent of trade show visitors responded to handshakes by “being more open and friendly.” The same study also showed that when you shake hands with those you meet, people are two times more likely to remember you than if you didn’t shake hands.

So, is your handshake powerful?

Here is my 3-step process for a powerful handshake:

Some women may be wondering ... should they extend their hand first to a male professional they are greeting? YES!

Women in the workplace need to be assertive and show confidence. Extending your hand first when meeting a male colleague or client is one way to do this.

Just for fun, here are 10 Nightmarish Handshakes to Avoid:

Whether you’re at a meeting, sales call, or job interview, an effective handshake needs to be part of your repertoire. All too often, professionals who are otherwise well-dressed, groomed, and experienced will fail to shake hands properly. So, start practicing that handshake before National Handshake Day -- and master this critical business networking gesture.