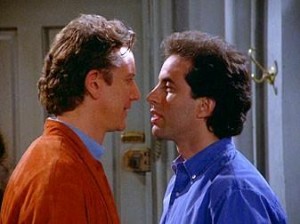 Don’t you just hate it when someone invades your personal space?

You know what I'm talking about ... you’re at a lunchtime networking function and the person standing next to you at the buffet line is telling you about his or her business, but standing so close to you that you can tell what the person had for breakfast?

Remember the classic episode on "Seinfeld" about Aaron, the close-talker? He was literally in Jerry's face, making him very uncomfortable.

It may be funny on a TV sitcom, but I can’t think of a better way to alienate potential clients, irritate your bosses, give the opposite sex the “creeps,” and pick up a bad reputation as a “space-invader.”

Is standing too close really that bad of an infraction? In a word, yes.

A friend once told me a story about standing on a balcony talking to someone. The other person kept moving closer, breathing in my friend’s face as my friend kept backing up, until finally she was pressed up against the railing. She reported fighting the urge to leap off the balcony to escape the unwanted intrusion into her personal space.

Not only does standing too close make others uncomfortable, it’s considered rude behavior or worse. It can be considered aggression or even harassment, and if there’s any touching involved, it can be considered sexual harassment. This type of behavior is simply not tolerated in today’s corporate America, so err on the side of caution.

So, how close is too close? Well, interestingly, that varies by country. Here in the U.S., a distance of anywhere from two to four feet feels appropriate for business connections. So, if you are doing business in other countries, you might want to investigate the norm for that culture.

Now, I don’t want to assign any particularly devious motives to space invaders. Some people simply have no sense of personal space, were raised differently, or just don’t have a clue.

Here’s a great rule of thumb: If you’re close enough to accidently spit on the other person while speaking —- you are too close! Back up.

If you notice the other person you are talking to leaning backwards, or even taking a step back -- please, please, please do not take a step forward toward him or her. This is your clue, oh clueless ones, that you are too close. Back up!

If you are so close that you can feel the other person's breath on your face or neck, then he or she can feel yours as well (and smell it, too). Take a breath mint and back up!

Perhaps you think leaning in shows you are interested and enthusiastic -- you're right, but still keep a respectul distance!

Perhaps you think standing really close is a great way to bond, or create intimacy with the other person. Think again -- this can backfire badly. In reality, it makes others feel anxious, squeamish, alarmed, defensive, and sometimes even violated.

Perhaps you think the person you are talking to is really attractive and you just want to get closer. If it’s a business situation, this is inappropriate one hundred percent of the time. So get over it!

CBS’s "The Early Show" did a neat little experiment about personal space. Their correspondent, Taryn Winter Brill, went undercover in the streets, elevators and buses of New York City to find out what happens when people get too close. Watch the result on YouTube.

What do you do if you are the victim of a space invader, and backing up doesn’t work? Do you grit your teeth and bear it, or would you say something? Let me know!